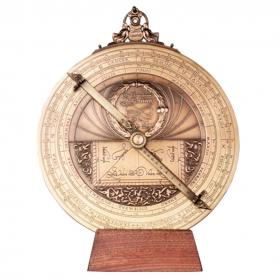 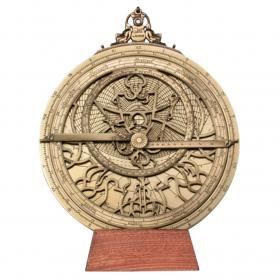 The Astrolabe is the most sophisticated and beautiful astronomical instrument. It is basically a representation of the celestial sphere, in which the most important stars are represented Used to measure time, azimuths and declinations of stars...

In Europe the Astrolabe became an essential instrument for astronomers, astrologers and surveyors until the end of the 17th century when it was replaced by more accurate instruments. In the Arab world its use lasted until the 19th century.

The first planispheric astrolabe is attributed to Hipparchus (150 BC), of the School of Alexandria, based on stereographic projection. The knowledge and use of the Astrolabe spread throughout the Islamic world centuries before it reached Europe. The Astrolabe was known in Latin Europe from the end of the 10th century.

After years of study and research, Dr. Luis Hidalgo Velayos has developed this astrolabe based on the classics. Its precision and aesthetics make this instrument, calculated for 41º of latitude, an absolutely unique piece.

Brass Astrolabe, engraved on both faces
Diameter: 20 cm
Includes a wooden stand
Includes a booklet (in English) with history and uses
Designed and produced in Madrid, Spain

In the same section
Ancient instruments