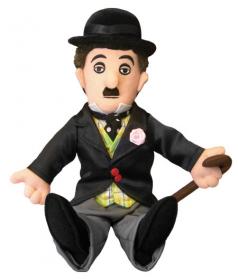 Chaplin is invariably linked to the character of "The Tramp", shown here in doll form.

Charlie Chaplin was born in London in 1889. YES, he was British!!! He moved the the United States in 1913 and created his character "The Tramp" in 1914 - becoming one of the most prominent actors of silent film. He was also a director, screenwriter, producer and composer of the music in most of his films! His most famous are "Modern Times", a satire of the industrialized world and "The Dictator" where he mocks the Nazi regime and Hitler in particular. Having directed and starred in over 80 films, he had never received an Oscar for best film, best actor or best director. He was kicked out of the United States on suspicion of communism and died in Europe.