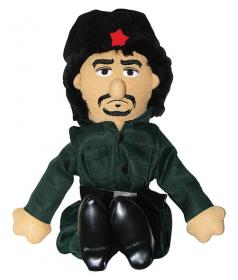 Che became a symbol of the revolutionary movement throughout the world.

Ernesto Guevara, known as "Che", was born in Argentina in 1928. A medical student he dreamed of marrying a girl from a bourgeoisie family, her family opposes the union and Che's life takes a very different turn. While traveling through South America, he discovers poverty throughout and becomes convinced that the way to abolish social inequalities is through armed struggle. A few years later, he finds himself in Bolivia and Guatemala, where he attended revolutionary organizations then he joined Cuba and the "26th of July Movement" of Fidel Castro. They came to power in 1959 and he became Minister Che Guevara. He retired in 1965 to spread revolution throughout the world. First he went to Congo, unsuccessfully, and then Bolivia where he was captured and executed in 1967.