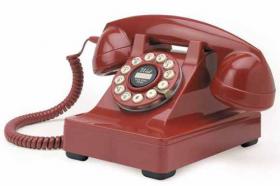 This item is discontinued
Free delivery

The iconic type 302 phone was designed by the prolific industrial designer Henry Dreyfuss and introduced in 1937. To create this egonomic handset, he used ear to mouth measurements from 2000 people. This phone was originally cast in metal and was the first to incorporate a bell in the base of the unit.

This piece was later produced using a heavy-duty plastic housing. Its appearance, combined with a rugged construction, earned it the nickname "The Cow's Hoof" because of its lipped hoof-style base.

This early desk version served as the standard for the better part of World War II while telephone design efforts were halted due to defense work.

Puzzle "The Bottle"
20 €
Our customers' reviews

In the same section
Design & Home