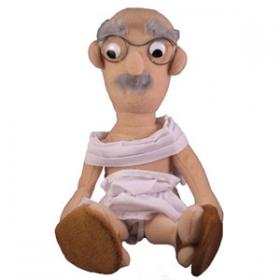 This item is discontinued
Gandhi became the symbol of non-violence. He is considered the father of India.

Mohandas Gandhi was born in 1869 in Gujarat, India. After studying law in England, he became a lawyer in South Africa. Shocked by racial inequalities, he organized demonstrations for the rights of Indians living there and developed his theory of nonviolent revolt. After returning to India, he led many struggles with the same spirit of non-violence protest against taxes that were too high or unjust laws established by the British colonial empire. He helped the poor, empowered women, abolished the cast system and of course his big fight : the independence of India. He led a simple life and was nominated for the Nobel Peace Prize five times between 1937 and 1948 although he never won. He was assassinated in 1948 by a fanatic.