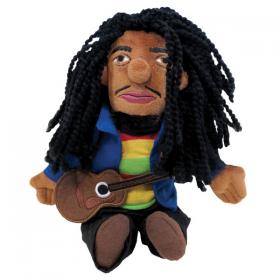 Bob Marley's name will forever be associated with reggae music and the Rastafarian culture.

Bob Marley was born in Jamaica in 1945 to a black mother and a white father. Living in a ghetto in Kingston he quickly immerses himself in music and in 1963 founded the band The Wailers with Peter Tosh and two other associates. They play ska, gospel, blues and rock steady. They begin to have some success and choose to self-produce which made selling their albums difficult and condemned them to poverty. Around that time, Bob Marley also starts the Rastafarian movement (see below). He moved to the United States in 1969, began playing his new music called reggae and the rest is history. He became an icon, sold millions of records and played concerts around the world. Unfortunately he died in 1981 at the age of 36 from cancer.

The Rastafarian philosophy is influenced by the Bible, African culture and Hinduism. Rastas reject materialism, money, the police, and western society (called "Babylon") in general. They do not cut or comb their hair (hence the appearance of dreads), or beard, are vegetarian, do not drink alcohol, but make heavy use of cannabis, which is supposed to help their soul to rise.