Streched, the putty can become as fine as wire. After some imagination, you can make some crazy designs. And it's simple to clean up, just roll all the little pieces into a solid ball of putty.

Twist it! If you pull with a lot of force your likely to end up with lots of little putty pieces, but those can be fun too...

Gently touch one putty ball to another to connect, so simple! 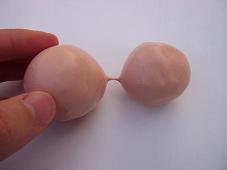 Try this simple experiment: stick a putty ball to the ceiling and watch it stretch as gravity drags it to the floor. If you lack patience, start with a sausage shaped putty instead of a ball.

The feel of our putty changes along with it's form. For instance, see this is putty stretched thin as paper. In this form, it feels more like plastic instead of the modelling clay feel of the putty ball. 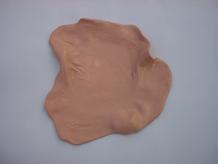 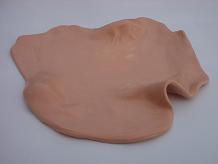 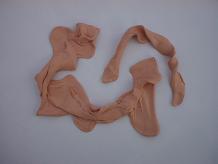 A fingerprint. Guess who it belongs to... 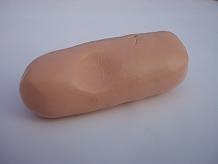 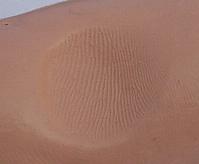 In the shape of a ball or flat as paper, magic putty has no problem sticking itself to the wall, fun fun fun!

"The fisherman with cisors in his neck", ultimate masterpiece by Stéphane, pictures by Jérôme. 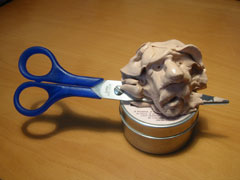 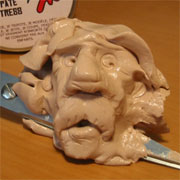 - The anti-stress putty has been in the US for more than 50 years. In 1968, it even took a small ride into space, during the Apollo 8 mission! The astronauts, who were the first ment to observe the hidden face of the moon, used it to fix their tools in weightlessness. [ Watch the video ! ].

- The putty has attracted curiosity for a long time. Many experiments have already been carried out. The most surprising experiment to date is undoubtedly that of the students of Alfred University. They released 50 kilos of putty from the top of a building. The result? With the second rebound, the putty ball exploded. [ Watch the video ! ]

See all our sales